What’s coming for the Dye and Dyestuffs Industry in India?

With the Indian economy consistently delivering a growth rate of approximately 7% every quarter on the back of structural reforms that simplify operating a business in India. It is safe to retain a widely positive outlook when it comes to the economic growth of the Indian subcontinent. As the Indian growth story pans out, along with it is the growth of its robust chemicals industries. According to a report by Federation of Indian Chambers of Commerce and Industry (FICCI), the chemical industry in India has a market size of nearly $163 Billion and is expected to grow with a CAGR of 9% for the next five years. 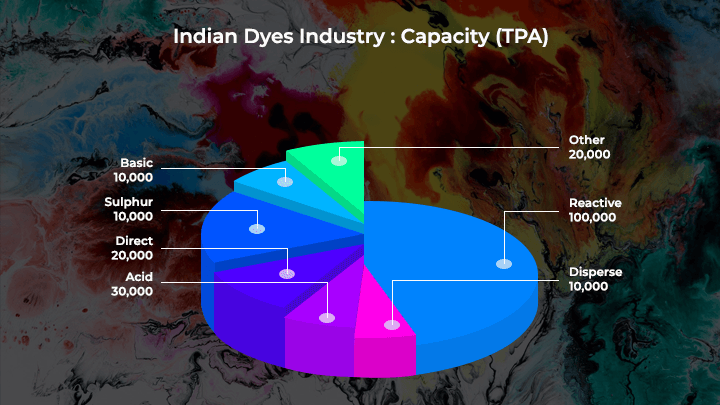 While nearly 1000 units in the unorganized sector contributing to nearly 35% of the total dyestuffs manufactured in India, the rest comes from 50 large production facilities belonging to the organized sector. Although these chemical products find several applications in industries such as textiles, paper, plastics, printing ink, and foodstuff industries, the textile industry accounts for nearly 80% of the dyes and dyestuffs consumption. The growth of the textile and leathers industry directly impacts the growth of the dyes industry. Due to the availability of the necessary raw materials and the regional hegemony of Gujarat and Maharashtra over the textile industry, nearly 90% of dyestuff production occurs there.

Despite the fact that India started out as an importer for dyes, due to persistent growth, India now exports dyes and dyestuffs to mostly all the countries it once imported them from. India exports dyes to various major economies such as USA, Turkey, Bangladesh, China as well as Germany.

Today, India exports dyes and dye intermediates to those countries on which it was once dependent for imports. We offer other countries a wide variety of dyes that include reactive, acid, inkjet, disperse, leather dyes. As recently as 2017, India exported dyes worth nearly $2.4 Billion and boasted a production of a whopping 2 Lakh MTPA which speaks a lot about the future of this industry. 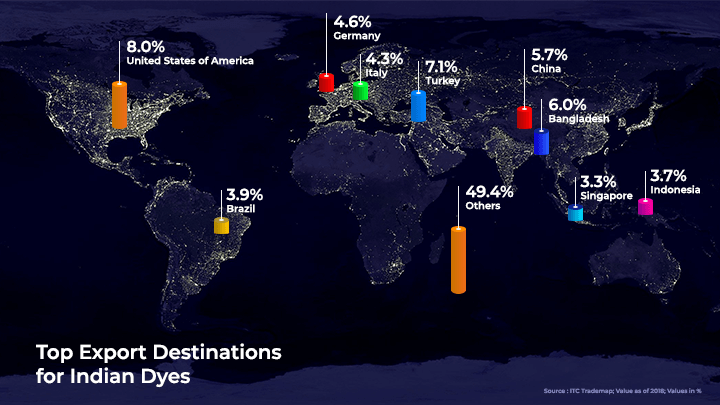 Although the Dyes and Dyestuffs Industry is performing at a very satisfying level, it still has a long way to achieve its true potential. Enlisted below are some of the steps that our administration needs to take in order to bring out the best of this sector:

● Developing State of the Art Research and Development facilities with international accreditation.
● Owing to its wide-scale applications, the Dye and Dyestuffs industry would greatly benefit from implementing power industry reforms. The industry should not only attract subsidies but also innovations that optimize operations of the plants.
● A significant contributor to our exports, to make the operations more viable for the manufacturers of Dyes, lesser interest rates would surely help this industry a great deal as there are large investments involved. 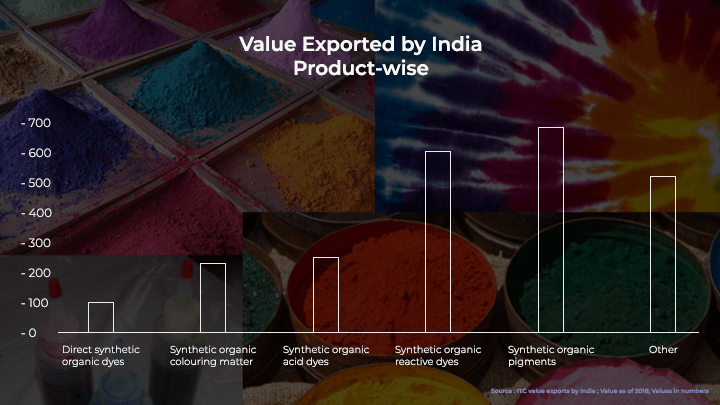 To recapitulate, the dyes and dyestuffs Industry in India is already very accomplished, but, given the ambitions of a 21st century India, there is still a long way to go. With advancement in technology, cheaper production techniques, and government support, India will not only be one of the leading suppliers of dyes but will, in fact, be the leader.

Meghmani Dyes and Intermediates LLP, a flagship company of the Meghmani Group is widely acclaimed across the globe for supplying a variety of Dyes, Intermediates, Optical Brightening Agents etc. We are extremely proud to have served customers from across 70 countries. We strive to deliver the best quality of products to our customers while being ecologically sensitive. Recently, Meghmani was also inducted into the esteemed club of ZHDC, as our goals for cleaner production align with those of the organization.

B. Different Types of Dyes with Chemical Structure